Periodontal Disease
In this section you will find the answers to your questions on periodontal disease - what causes it, how it's treated, how to prevent it. There is an explanation on the relationship between gum disease and overall health, a detailed breakdown on the three steps involved in treating periodontal disease, a discussion of the merits of antibiotic therapy, a look at some common myths or "magic bullets" - and much more.

To begin, on this page we discuss what periodontal disease is. For more information on related subjects, just click on the links in the sidebar and follow the subsection headings. And remember, if you're looking for information on a specific topic or term and you're not sure where to find it, check out our index or site map.

What is Periodontal Disease?
Periodontal disease is an infection of the gums and/or bone that surrounds the tooth. Generally, the disease is painless, and most patients are not aware they have a problem until examined by a dentist.

With a healthy tooth, the root is set in the jawbone with a strong ligament, which keeps the tooth tightly attached to the bone. Gum covers the bone, and like skin, protects it from bacteria that are constantly present in the mouth. The gum connects to the neck of the tooth with a band of fibers, which insert just above the bone into the root. In a healthy situation, the gum edge is higher than the fiber attachment, forming a space around the tooth. This is similar to having a turtleneck sweater, and this sulcus should be 2-3 millimeters in depth. 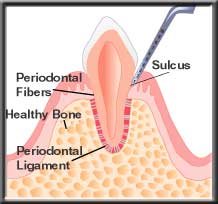 Probe next to sulcus

Everyone has bacteria in their saliva continuously. These bacteria precipitate (collect) on all surfaces, forming colorless, sticky colonies called plaque. Unfortunately, this plaque also forms in the space underneath the edge of the gum. If the plaque is not removed (something that takes careful brushing and flossing), it will start to cause an infection in the gum. Plaque that remains on the tooth for a long period of time absorbs salts from the saliva, and becomes hard. This calculus, or tartar, cannot be removed by brushing and flossing, and must be dislodged by a dental professional. 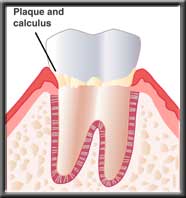 The Stages of Periodontal Disease
The first stage of periodontal disease is gum inflammation, or gingivitis (from "gingiva", meaning gum, and "itis", meaning inflammation). The body reacts to the bacteria by bringing in blood vessels, which carry cells to destroy the bacteria. This makes the tissue appear red, perhaps swollen, and patients may notice bleeding when cleaning their teeth. 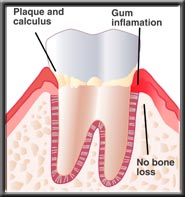 Gingivitis with calculus
seen between teeth

At this stage there has been no bone destruction, and careful removal of all calculus, along with meticulous patient brushing and flossing, generally completely corrects the problem. If the gingivitis is not corrected, the bacteria may destroy the fiber barrier, and start moving down the tooth surface. There is a war between the advancing bacteria, and the body trying to defend against invasion. Some of the destruction is caused by the body itself, when attempts to destroy the bacteria also destroy healthy tissue in the area. There are many factors that influence how well your body defends against the bacterial invasion (see Host Resistance).

As the bacteria advances down the tooth, the inside lining of the gum, and the bone, are destroyed. This penetration of bacteria forms a periodontal pocket, or deepened space between the gum and tooth. By measuring the depth of the space with a periodontal probe your dentist can see how much bone loss has occurred. 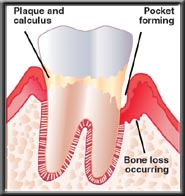 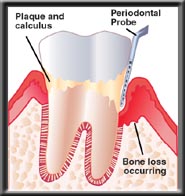 Probe inserted 5mm under
gum to base of pocket

Probe held beside gum
to visualize depth of pocket

And when bone is lost, the tooth support is weakened. The tooth will become loose and, if the disease continues, will be lost. 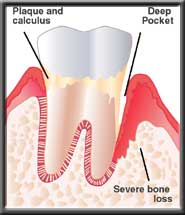