Systemic antibiotics are drugs that, when given, affect the whole body. Normally they are administered in pill form when used in periodontal treatment. Periodontists use systemic antibiotics to treat acute infections, such as a gum abscess (gum boil), and also before treatment when patients have certain medical conditions, such as mitral valve prolapse (See Prophylactic Antibiotics ). Systemic antibiotics are also recommended for two weeks after regeneration procedures and when implants are placed. This is done to make sure there is no infection during the early healing stages, which are critical with these two techniques.

Because periodontal disease is an infection, it would seem logical that antibiotics would eliminate the problem. Unfortunately, when treating routine periodontal breakdown, the effects of antibiotics are short-lived. This is because the bacteria that cause the disease reform immediately after the antibiotics are discontinued. In fact, periodontal cleanings done to remove calculus and plaque appear to be as effective as antibiotics in controlling the infection.

As a rule, for most routine periodontal conditions, systemic antibiotics are not necessary or even useful. In some advanced cases there may be very specific harmful bacteria that can be eradicated with systemic antibiotics. For these cases, a short-term treatment of antibiotics may be useful. In cases where traditional treatment does not produce the expected results, the mouth may be cultured to find out what specific bacteria are present. This will guide the therapist on which antibiotic to use.

Because overuse of systemic antibiotics can cause patient sensitivity and bacterial resistance, they should be used only when specifically indicated.

Recently there has been interest in the use of low dose antibiotics. The dose is so low the drug does not act to kill bacteria, but rather to change the way the body responds to infection.

One interesting effect of certain antibiotics is they not only kill the bacteria that may cause periodontal disease, but they also reduce the body's production of collagenase, an enzyme that destroys gingival tissues. We all need some collagenase as older tissue is removed and replaced with new tissue. However, in periodontal disease there seems to be an overproduction of collagenase, causing the body to destroy healthy gum tissue. The antibiotic doxycycline was found to combat these enzymes, even in doses so small that there was not an antibiotic effect. The advantage of the smaller doses is a great reduction in the chance of resistant bacterial strains forming, and in fewer side effects.

Periostat is a capsule of 20mg of doxycycline, and two clinical studies have shown that patients who take 2 capsules daily have a reduction in clinical inflammation. The studies were limited to 9 months, and so there is no official recommendation to take the product for a longer period. From a practical standpoint it seems that Periostat can be taken indefinitely. However, some preliminary work indicates that there is a positive residual effect for 3 months after stopping the drug, and so some practitioners recommend taking Periostat three months on, three months off. The daily 40mg doses are so low as not to qualify as an antibiotic, and there is no known effect on the pocket bacteria. Thus Periostat must be used in conjunction with other therapies that address bacterial removal . Indications for Periostat are generally seen in recall patients who are not responding well, and have generalized inflammation in spite of reasonable oral hygiene.

While systemic antibiotics have a very limited use in treating typical periodontal disease, there has been much interest in local antibiotic delivery. If an antibiotic can be delivered directly to the pocket, without the patient having to take systemic doses, there are far fewer side effects, and fewer chances of resistant bacteria forming. In addition, with direct local delivery, the concentration of the antibiotic at the diseased site can be 100 times greater than taking the medication orally. However, it is important to note that all local delivery antibiotics are recommended as adjuncts to scaling and root debridement, and not as stand-alone treatments. 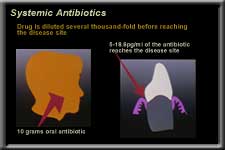 Systemic antibiotics are diluted before reaching the pocket. With local application, the antibiotic is inserted directly into the pocket, resulting in much higher concentrations.
(click on image for a larger view)

Actisite
A major difficulty with local antibiotics is keeping the antibiotic at the site for the several days necessary to kill the bacteria. Simply rinsing the pocket with antibiotics does little, and normal pocket fluids flush the antibiotic out of a pocket in less than 2 minutes. This is one reason that mouth rinses are so ineffective in the periodontal pockets. In the last ten years four products have been introduced into this country that allow prolonged drug delivery directly into the pocket. The first introduced was Actisite, a string embedded with tetracycline, a drug known to kill many of the bacteria that cause periodontal disease. The Actisite fiber is placed in the pocket and left for ten days, and during this time high concentrations of tetracycline are released. At the end of 10 days the string is removed from the pocket. Over the next few days the inflammation will subside, and the pocket will ideally shrink as the tissues tighten around the tooth. The major difficulty with Actisite is that the string must be removed, requiring a second appointment. Placement may cause some minor discomfort, requiring a drop of anesthesia, but as with all local delivery products, there is little or no discomfort while the product is in place. 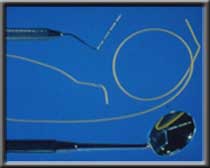 Probe in 6mm pocket with
inflammation and exudate (pus)

Three months after Actisite, pocket
reduced to 3mm without inflammation

Three months after Actisite, no
inflammation or bleeding on probing

Atridox (controlled released doxycycline hyclate , 10%)
Atridox is a registered trademark of Block Drug Corporation.
Atridox is a unique delivery system that uses a gel, which can be injected directly into a pocket. The gel hardens quickly, and then slowly dissolves over the next 7 days, releasing doxycycline. The manufacturer claims that with this system the entire pocket is filled with the antibiotic, which may not be the case with fibers or chips. This appears to be an advantage, although there are some researchers who feel all three systems are effective because the antibiotics diffuse into the pocket fluid, even without direct contact.

The product comes in two syringes, one containing 450mg of a liquid polymer, and the other 50mg of doxycycline hyclate, an antibiotic effective against most periodontal pathogens. The syringes are interlocked together, and the contents mixed vigorously.

Mixing contents of the two syringes

Following mixing, a canula is placed on the syringe containing the Atridox, and the material is injected under the gum into the pocket. This generally requires no anesthesia.

Atridox being injected into periodontal pocket

Atridox sets rapidly on contact with crevicular fluid or blood, and quickly takes on a wax-like consistency. This allows the material to remain in the pocket for 7 days, during which time it dissolves, slowly releasing the antibiotic.

To help prevent the product from extruding from the pocket, cyanoacrylate ("super glue") may be be applied to the gum margin. In some cases a periodontal dressing is placed to help retention. The patient should refrain from brushing and flossing this area for two weeks. During that time chlorhexidine mouthwash is generally recommended.

Studies have shown decreased probing depth, reduced bleeding, and improved attachment levels when Atridox is used in conjunction with scaling and planing.

Pocketing and bleeding on probing

Pocket reduction and lack of bleeding after Atridox

PerioChip
PerioChip is a thin wafer that contains chlorhexidine. While chlorhexidine is not an antibiotic, it is a powerful antiseptic and kills most pathogens. The wafer slides under the edge of the gum into the pocket, a simple procedure that does not require anesthesia. The wafer dissolves over several days, and does not have to be removed.

PerioChip ready to slip under gum into pocket

Arestin
The most recent local antibiotic therapy introduced consists of small spheres of minocycline, a derivative of tetracycline. This drug, similar to the ingredients in Actisite and Atridox, is very effective in killing the bacteria that are thought to cause periodontal disease. The primary advantage of this new product is the ease of use. The spheres, which look like a fine powder, are contained in a small blunt plastic needle, and are injected into the pocket. This requires no anesthesia. The spheres are bioadhesive, and stick to the pocket wall where they slowly release minocycline over a 14-21 day period. Because the spheres are also biodegradable they do not require removal.

The plastic syringe consists of a cap, a plunger, and the Arestin, which is expelled by the plunger

Close-up of Arestin powder being expelled from syringe tip

Arestin being expelled under the gum and into the
periodontal pocket

Generally speaking local delivery antibiotics are used in the Periodontal Maintenance phase of therapy, when isolated areas of the mouth seems to be worsening. Their use is generally not recommended during the active phase of treatment. The effectiveness of these products is somewhat controversial, and while there is usually some improvement, whether these results are long-term has yet to be demonstrated. Certain cases seems to respond better than others, and your periodontist will help advise you whether these treatments may be beneficial in your particular case.